The surest way to start an online war is to talk about differences among digital cables, network products, and digital sources, especially digital-only products such as streamers. It’s never long before someone invokes the “bits are always bits” argument, whining that digital is either “on or off”, and so there can’t be a “better” digital signal—it is 100 % perfect or not working at all. So where does the notion of bits are bits, or, as often sardonically put online, “bits is bits” come from? 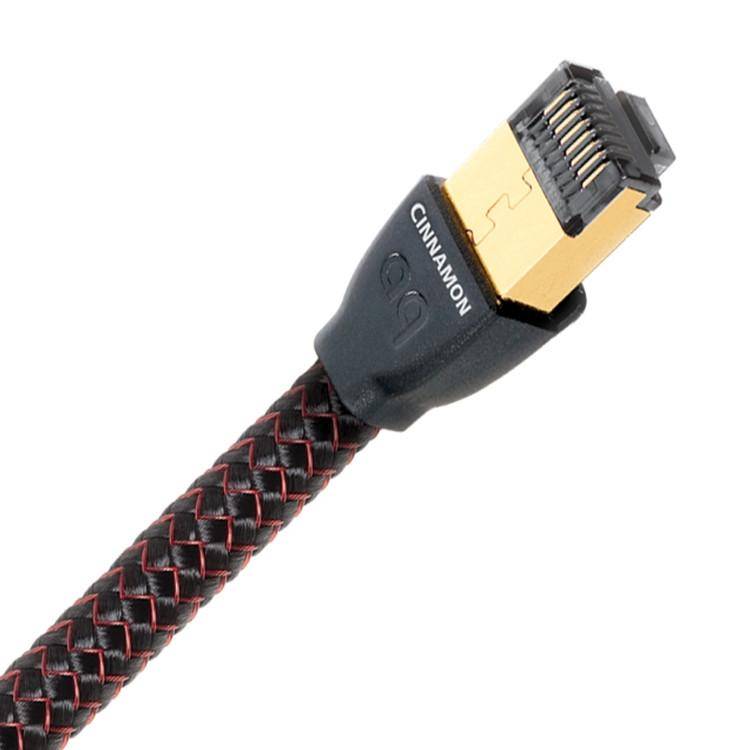 When you save a file on a computer, you can copy it again and again, hundreds, thousands, and millions of times, and it will be exactly the same. If there are any errors during copying, the file system will simply ask for a re-send of the missed data. If there is noise on the signal while the file is copying, it doesn’t matter—nobody is listening. Error correction ensures that the file is unlikely to be slightly wrong—it’ll either be bit-perfect or messed up. Also, digital data survive transmission over thousands of miles of wire over the internet, and high-speed loading into RAM from a hard disk. It's hard to see how there could be any problems or degrees of quality for relatively low-bandwidth audio to be sent three feet from a streamer to a DAC.

How is it even possible for one digital cable or product to sound different from another?

It's important to understand that there are no “digital signals”; there are analog signals that carry digital information. High-bandwidth digital signals are not 'pulses and no-pulses' marching down a wire like a line of ants—they are complex, high-frequency analog waves, and digital processors must recognize and decode many different voltages (16 or more for Ethernet) to turn the transmitted data into information. Because "digital signals" are high-frequency analog signals, cable design matters. This is why there are different Cat levels of Ethernet cable, and why cheap USB cables often don’t work with high-speed devices. Shielding a cable can damp energy peaks in the signal or cause non-linear distortions, and so designing a digital cable is most certainly not an “on or off” engineering task.

Any cable you plug into a system is subject to antenna effect, by which it picks up radio-frequency and electromagnetic field interference. This noise can couple with the signal that’s running through the cable and cause distortion (and yes, digital signals can be distorted, as we'll see further down). Noise can be transmitted through the cable, travel through digital circuits, and eventually couple with an analog signal, causing distortion. Lastly, noise can simply be present in your system, obscuring low-level information, and graying your black backgrounds.

A high-quality digital cable is well shielded, and that shield is designed to direct noise away from your system to ground. Don’t think that shielding against gigahertz transmissions while preserving signal integrity is easy or cheap.

Audiophile source components such as streamers are engineered to produce and accept as little electrical noise as possible using shielding and high-quality power components and supplies. This is not the case at all with a laptop or any other regular consumer electronics. So if routers and network switches are noisy, and error correction is running full blast, it is highly likely that even an optimized digital source will experience increased electrical noise from the processors and their extra load on the power supply. Any steps you take to reduce this helps the overall sound of the system.

Remember, digital data in a regular computer are transferred without you sitting on the end of that chain, listening to the information from this transfer through a transparent, high-resolution audio transducer.

A music stream is fundamentally different from data

The “bits is bits” argument is centered on a digital data stream, which is different from a digital music stream due to one fundamental component: time. We can’t emphasize this one enough—data and a timed music stream are not the same.

One second of stereo CD-quality music contains 1.4 million bits (44,100 samples x 2 channels x 16 bits per sample). These bits can be copied again and again with no errors whatsoever, because copying one second of music data can take 0.001 of a second, or 10 minutes, or even 0.00001 seconds for the first half, and two years for the second, and it’ll always end up with the same bit-perfect result. Time is irrelevant to a data stream.

Everything changes when you want to play that one second of music. Now, those 1.4 million bits need to be marched into a DAC at exactly 1/44,100th of a second intervals. There are no resends, no pauses—once you hit “play” it’s go-time.

If a DAC doesn’t receive any piece of data it’ll simply estimate what it might be, a process called interpolation. This is textbook distortion—the change in a signal from the original during processing. How much interpolation is happening in your DAC? Do you know? You won’t until you remove sources of noise, and your music sounds better.

Another form of distortion is jitter. It’s hard to transmit and receive a signal that needs to be accurate over millions of bits at a steady marching beat of 22.6 microseconds (and that’s just for CD quality, imagine 192 kHz, 24-bit music). If the clock starts too fast or too slow, or drifts, the samples will reach the DAC out of time, and result in distortion of the recreated analog sine wave.

Clocks for digital signal processing are based on crystals that vibrate at specific frequencies for each sampling rate. When you play a 44.1 kHz file and then a 96 kHz, the DAC has to switch to a different clock, which is why so many DACs take a little while to switch, and you often hear relays clicking to engage the new circuit. Crystal clocks’ performance vary over time and temperature. Some high-end DACs have little clock “ovens”, allowing the crystal to operate at a steady, known temperature. Different digital devices have different qualities of clocks and implementation. A better DAC might have a better analog output stage, but could also have a much more accurate set of clock crystals. Don’t think that clock upgrades are small—better clocks make a massive improvement because cheaper clocks can drift by one sample per second or more.

Jitter is a clearly measurable and audible distortion, and this is partly how one digital-only source can sound better than another. 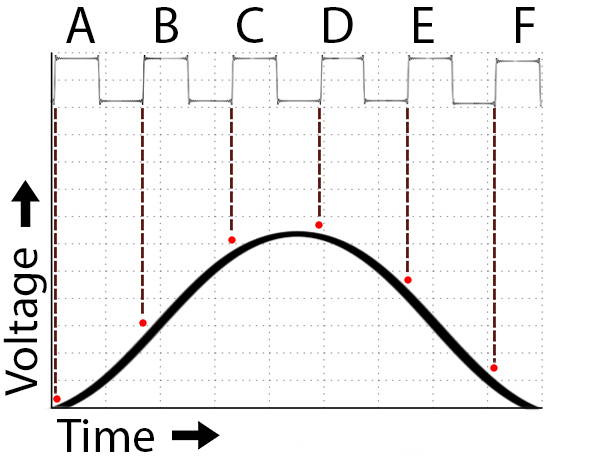 The illustration above shows a perfectly re-created sine wave with no jitter. The square wave on top is the clock, and the letters A-F are the samples being sent to the DAC by the streamer. If this is CD quality, that clock is running at 44.1 kHz, and each sample is 16 bits long, representing the voltage of the original sine wave at the moment the signal was sampled. Each analog voltage is generated at exactly the right moment to re-create the original sine wave. 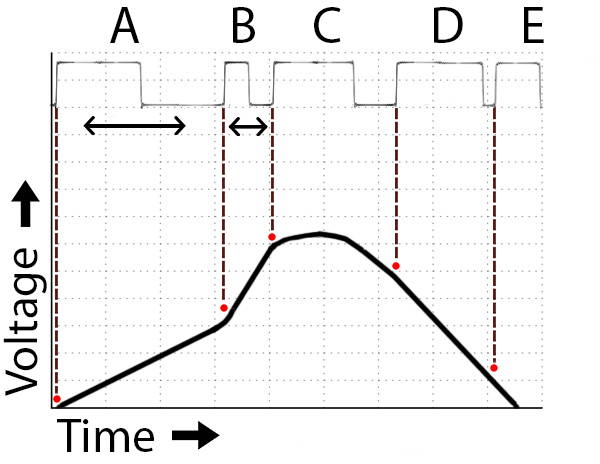 The illustration above shows what happens if the clock drifts or is distorted. The sample reaches the DAC out of time, and the analog wave is also distorted. Remember this is both a simplified and exaggerated version of events, but it should illustrate why time and timing is crucial to a digital music stream.

Digital audio processing is also not a clear-cut, on-or-off choice. There are many ways to handle how a digital sample is converted into an analog voltage, and each of these comes with compromises and challenges. Before being converted to analog, digital signals must have their clocks filtered out of them, and have “anti-aliasing” filters applied. Sometimes they need added noise called dither to reduce distortion caused by quantization error. (These issues arise because real-life voltages with possibly infinite numbers after the decimal point need to be rounded to fit into 16 or 24 bits.)

Don’t take our word for it. Jump across to PS Audio’s website where they have an excellent online magazine called Copper. Scroll down to Issue 1 and find Richard Murison’s ‘Quibbles and Bits’ column. In the next 11 issues, he goes into detail about DAC design and audio-signal processing. Richard explains it all with great clarity, but if you’re not an engineer, most of it is quite complex. If nothing else, you’ll come away with great respect for how much design, and even artistry, goes into digital circuits.

Spend some time in audio, and you'll realize everything comes back to power supplies. Better power means better sound. It doesn’t matter what device is being improved; this a system, and an improvement to one device can mean better performance for other devices in the chain. The cheap SMPS (switch-mode power supply) of your network switch doesn’t know it’s powering a digital device. It’s still potentially injecting high-frequency switching noise into your home power supply, and this noise is ready to affect anything on the circuit, analog or digital.

Anyone with a well-set-up, transparent system will find that nearly everything makes a difference. It’s just a matter of deciding if that difference is worth their time and money. In our experience, upgrades and changes to digital sources and cables are every bit as significant and noticeable as other upgrades, and in some cases, even more so. Whether you’re changing digital cables, upgrading the power supply on a digital product, moving from a computer to an audio streamer, or starting from scratch with an optimized digital front-end, we have the products and know-how to get you set up with the best system for your money.